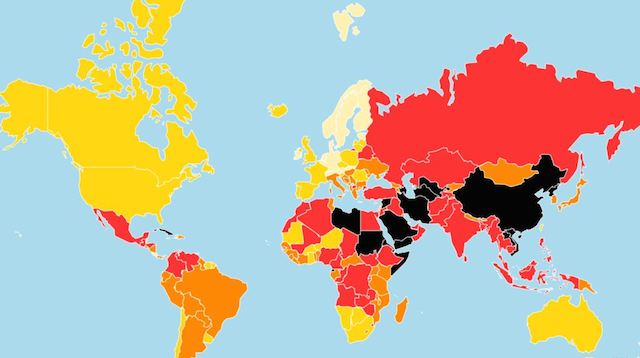 Reporters Without Borders (RSF) has ranked Iran 169th of 180 countries in its 2016 edition of the World Press Freedom Index.

Iran climbed four places since last year’s report but remains one of the most repressive countries in the world when it comes to press freedom.

According the RSF report, which was published on Wednesday, 20 April, this year’s index saw a “deep and disturbing decline in respect for media freedom at both the global and regional levels.” Since 2013, the overall level of media freedom in the world has declined by 13.6 percent.

“It is unfortunately clear that many of the world’s leaders are developing a form of paranoia about legitimate journalism,” said RSF secretary-general Christophe Deloire.

“The climate of fear results in a growing aversion to debate and pluralism, a clampdown on the media by ever more authoritarian and oppressive governments, and reporting in the privately-owned media that is increasingly shaped by personal interests. Journalism worthy of the name must be defended against the increase in propaganda and media content that is made to order or sponsored by vested interests.”

RSF’s World Press Freedom Index, which has been published annually since 2002, is based on an evaluation of media freedom that measures pluralism, media independence, the quality of the legal framework, and the safety of journalists in 180 countries.

Iran is rated the world’s third biggest prison for journalists by RSF, and ranks among the top three most censored countries in Freedom House Freedom House’s annual study of internet freedom.