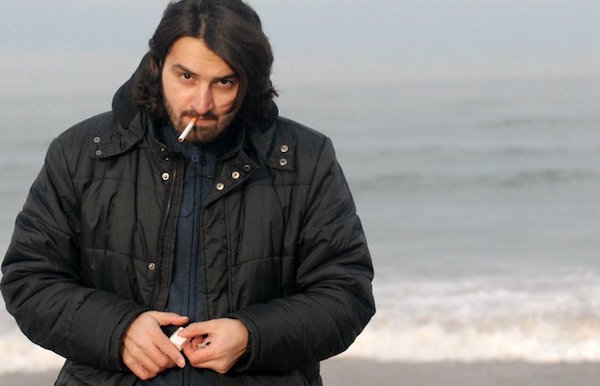 In Iran, Ahmad Jalali Farahani was a respected journalist and an award-winning documentary filmmaker. In Denmark, he is a refugee. Or a “loser”, to use his own word. In an interview with Journalism Is Not A Crime, Farahani shares the heartbreaking story of his journey from the brutal Evin Prison to a peaceful life in Northern Europe – and his daily struggle to gain back the identity he gradually lost on the way.

“Why stay in Iran?” is a question Iranian journalists, writers and artists are repeatedly asked. They are constantly under pressure, harassed, and at risk of imprisonment and torture simply for doing their job. Yet, for many, leaving their country for a life in exile isn’t a door to happiness.

“To live in exile means you are a loser,” Farahani explains. “I lost my identity, I lost my future, I lost my home, my job, my connections, everything. And really, I don’t know who I am anymore.”

For Farahani, 40, who now lives in Copenhagen in Denmark, leaving Iran was never an easy decision. Having worked for Iranian state television and several newspapers, and as an independent filmmaker, he had a long resume and a good reputation within his field before being exiled in 2010.

As a reformist journalist, Farahani inevitably became a target of the authoritarian regime of the Islamic Republic of Iran, which detained him on three occasions for his work as a filmmaker and reporter.

“The first and second time weren’t so bad; they just questioned me about my activities,” he says. “But the third time I got tortured very badly and was put in solitary confinement. It’s very hard for me to talk about what happened. I promised to myself I would never come back.”

His third arrest took place on February 7, 2010, in the aftermath of the disputed presidential election, less than three months after he was released the second time. Eight officers turned up at his house, seized his laptop and camera, and took him away. His daughter was just seven years old at the time.

“I can’t sleep at night; I have very bad nightmares,” he says. “When I close my eyes, all these scenes, second by second, come to me. From the first footage when they came to our house and started to beat me in front of my daughter in my home. I lost everything. A father in a family is like a symbol for his children.”

Farahani was detained in Iran’s most notorious jail, Evin Prison, where he was harshly interrogated and tortured, both physically and psychologically for 40 days.

Following his release, he decided to stay in Iran and try to rebuild his life. But the authorities did not leave him alone; they called him in for weekly questioning sessions, asking him to report everything he had done and everyone he had met with. They wanted him to cooperate by spying on friends and colleagues who might oppose the regime.

“When they release you, it doesn’t mean you are free. It means you have two options: You can cooperate with them or you can go back to prison,” he says.

“Life after jail is hell. You can’t get a job, because you were jailed. My wife couldn’t find any job. My best friends avoided me; they were afraid. Because after prison, you are either a person cooperating with the regime or one who has problems with the regime. If you are the first, they can’t trust you; if you are the second, they can’t connect with you.”

In the summer of 2010, having been summoned to the prosecutor’s office at Evin, Farahani felt he had no choice but to flee Iran with his wife and daughter for Turkey. Then in November of that year, they got the opportunity to go to Denmark after his documentary Sofar was screened at Copenhagen Documentary Film Festival.

Living in Exile: Just Another Refugee

For the first nine months in Denmark, the small family moved around to different refugee camps across the country. Today, having been granted asylum, Farahani, his wife and now two daughters live in a calm area in Copenhagen.

Since arriving in the country, Farahani has worked hard to rebuild his career as a journalist: He created a website for Danish news in Persian, which today attracts more than 140,000 daily visitors, and he has started various film projects, one of them about the life in refugee camps in Denmark. But finding support and funding is an ongoing struggle.

Last year he finished his film We Are Journalists, a documentary exploring the difficulties that journalists face in Iran, which was nominated for several awards, including the Danish Bodil Prize for Best Documentary in 2015.

“Being nominated for a Bodil Prize was a huge honor for me,” he says. “But on the day we were going to see the film being screened, the job center called me in for a meeting. They told me, ‘Tomorrow at 6 am you must be at this place, wearing these clothes, and go out and clean the streets.’ On the same day.”

In Denmark, the respected filmmaker and journalist had become just another refugee.

“Here, nobody cares who I am,” he says. “For the system in Denmark, I am just a person who should find a job and a home, have an ability to speak Danish, and so on. Exile is like jail. Of course I can go freely in the streets, walk, do fitness etc. But I don’t have my identity.”

Like any other refugee or immigrant arriving in Europe, Farahani faces constant pressures from authorities, job centers, media and politicians to “integrate.” But his past in prison – the stress, the torture, the solitary confinement – has left deep marks on him, making it hard to live up to the many expectations of his new country.

“I got very bad mental problems after jail. I cannot trust anybody. When I’m in a group — to learn Danish or find a job — I can’t connect with people. When somebody rings the door, my heart drops. When I get a new letter by post, I am afraid. I can’t even walk alone in the streets because I am afraid someone is following me,” he explains.

Only when he looks at his daughters does Farahani know that leaving Iran was the right decision. The oldest daughter lives a good life close to that of many Danish teenagers: She now speaks the language, goes to school and has friends. The youngest is their “Danish girl,” who, unaware of her father’s tragic story, only knows of Denmark and the Danish language. Both girls have a future they might not have had in Iran.

“I don’t want to only paint a dark picture of Denmark. My family and I are safe here. We aren’t afraid of tomorrow. I don’t have problems with censorship here. That’s perfect,” he says. “And I’m grateful because of my Danish friends who really helped me and showed their hospitality and kindness. While the Danish system only considers you a number, I’ve realized that many Danes do not see me and my family as strangers.”

When asked if he has any regrets, Farahani pauses for a moment.

“My wife,” he says, “she is here because of me. She didn’t have any problems with the regime, but she decided to come with me because of our daughter. She’s suffering right now, having been away from her family for years. She cries every night. She tries to hide it, but I know. I feel guilty about her. When I found out my wife is crying every night, I can’t say I don’t have any regrets.

“Sometimes I ask myself, what was the price of all this? It was my life, my future, my identity. If I didn’t have my daughters, I would never have fled Iran. It’s for them.”

“Many of our patients are torture survivors from Iran”

Tortured in Syria: “The flashbacks are worse than reality”

Four Years in an Eritrean Jail: “Poetry Gave Me Hope”